The white lions of Timbavati South Africa are much more stunning in person than any photograph can reveal. Their divinity is more pronounced, their gleaming white coats shining in the sun, blue eyes sparkling. And those with the tawny fur and white lion gene are just as majestic. African elders tell us that Timbavati means the “Place where the Star Lions came down”.

I had been in South Africa for a few weeks already when, by some divine intervention, I was given the opportunity to meet the only white lions left living in the wild. Just before heading on my journey a dear friend told me of them and lent me the book, “Mystery of the White Lions”.  She also connected me to someone who knew the author, Linda Tucker, Founder of the Global White Lion Protection Trust in Timbavati, South Africa. The white lions are believed to be of divine heritage and messengers of the gods. Timbavati is where the first ever white lion was born four hundred years ago.

Reading her book, I had become enamored with the idea of meeting these holy creatures. The white lions are said to have come to earth to help guide humanity. Lions teach us to be fearless to be ourselves and to trust our intuition. I felt them calling me. But would meeting them even be possible? “Anything is possible.” I reminded myself. My intention was set and I knew I had to make it a reality.

I reached out to Linda for a meeting with the lions. After a few emails she responded. The retreat center was already at capacity and Linda was very busy but there was one option to accommodate me the following week. It was a room in a house alone, for a three-night minimum, at the cost to feed the lions each day. And remarkably, in all of South Africa I happened to be volunteering at a wildlife center less than two hundred miles from Timbavati. It was all in alignment. The universe had heard my wish and it was coming true! I made plans to go to Timbavati.

When at last I entered the lions’ territory, my guide Sibisimo drove us down the sandy road towards my house, before making a sharp turn and coming to a sudden stop. There before me was the white lion pride. Two large adult white males, a young tawny male and two white females casually sat together in the tall grass. They looked at us, unperturbed, and continued resting. I was in such awe. My eyes wept joyfully. It was hard to believe that I was living what I had dreamed of.

Each morning and evening I would go on lion patrol with Sibisimo. Arriving to the lion territory, just a few hundred yards away from the house I stayed in, there was a tall electric fence surrounding their homeland of many miles. It was his job to be sure that all of the lions were accounted for each day and to help keep them safe from poachers. Sibisimo held a large metal antennae, as long as our dashboard, out of the window to check the radar for signs of the lions nearby. Only when the signal was clear would we be safe to open the gate and enter.

On my first lion patrol we found the pride almost immediately. Sibisimo stopped the truck and turned the engine off. They were about thirty feet away. Unexpectedly a young male lion stood up and started walking towards us. Sibisimo told me to slowly lock my door and roll up the window. Within seconds the young lion had walked up to my side of the truck, put his paw on my door handle and pulled to try to open it. Sibisimo was astonished, saying he had never seen one do that before. In reverence I sat watching the beautiful animal. The lion looked right back at me. Then he stepped a few feet away from the vehicle and laid down in the grass where he could see me better. We watched each other for several minutes. Sibisimo sat quietly as the lion and I locked eyes.

His name was Ingwavuma and I recognized a relative in him. We were connecting in a way that was beyond my normal human understanding. And I was completely unafraid of him. I felt I knew him. We sat there for many minutes before Sibisimo turned the engine on to finish our patrol. Then Ingwavuma casually walked back to the company of his pride.

In those moments of connection and fearlessness, I knew I was being taught an enormous lesson in trusting my intuition. A lesson in lion heartedness, directly from spirit.

As an animal communicator I have connected with Ingwavuma since then. He is one of my spirit guides and I call on him when I need help in overcoming a fear. But I am not unique, this kind of connection with animals is accessible to anyone who seeks it. Believing it’s possible and letting go of any fear that it’s not, is the key. 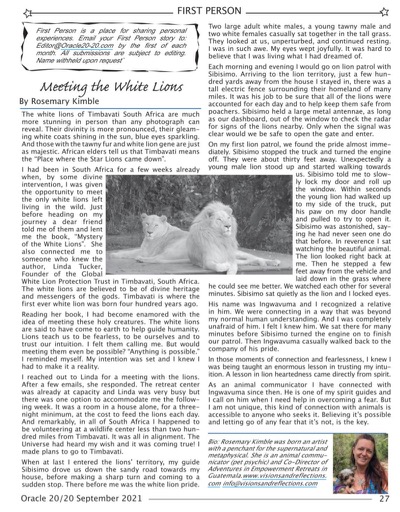